The Women’s Fund of Door County has awarded the Door County YMCA a Sustainability Grant. This grant will allow 5th grade girls to participate in Girls Night Out.

Girls Night Out is a 9-week program created and designed to help 5th grade girls successfully navigate what can be a challenging phase in their lives and make it a positive and healthy experience. Participants were involved in hands-on activities that helped them to understand and make their way through the social, emotional, and physical challenges that lie before them, as well as explore the benefits of healthy choices that include nutrition, physical activity, and building emotional resiliency.

“As in every community, there is a need to help girls understand and prepare for the changes that occur within themselves emotionally, and around them, while transitioning into their teenage year,” said Jennifer Moeller, Chair of the Women’s Fund of Door County. “We are pleased to provide this grant for Girls Night Out so the YMCA can effectively tackle the major changes and issues that 5th-grade girls face in daily life.”

The mission of the Door County YMCA is to put Christian principles into practice through programs that build healthy spirit, mind and body for all through program centers located in Fish Creek and Sturgeon Bay.  The Door County YMCA touches the lives of more than 7,800 individuals annually and seeks to strengthen the foundation of our community by providing people of all ages with the resources and solutions for healthy living, youth development and social responsibility.

For more information regarding the Door County YMCA, please call (920) 743-4949 or visit www.doorcountyymca.org.

The Door County Community Foundation, Inc. is a collection of separate charitable funds set up by individuals, families, non-profit organizations, private foundations and businesses that are managed, invested and disbursed for the current and future good of Door County.  The Foundation was launched in 1999 and currently administers $20 million in charitable assets.

The Door County Medical Center Dental Clinic provides oral health care to the youth and adults of Door and Kewaunee Counties. The clinic serves those who are on Medicaid and/or those with no dental insurance that are low-income with no dental home.

“The market value of the dental work that the Dental Clinic performed in 2017, if done in a private setting, was $1.33 million,” said Glenn Timmerman, board member of the Door County Community Foundation. “The Community Foundation is pleased to provide this grant which will help cover the costs of providing care to uninsured children and adults in our community.”

Founded in 1975 Door County Medical Center Dental Clinic provides oral health care to the youth and adults of Door and Kewaunee Counties. The clinic serves those who are on Medicaid and/or those with no dental insurance that are low-income with no dental home.

The Door County Community Foundation, Inc. is a collection of separate charitable funds set up by individuals, families, non-profit organizations, private foundations and businesses that are managed, invested and disbursed for the current and future good of Door County.  The Foundation was launched in 1999 and currently administers more than $20 million in charitable assets.

Every year it’s my responsibility to say a few words at our community’s annual Celebration of Giving luncheon about why the Door County Community Foundation has selected the honoree. My assigned task is to articulate the themes from a person’s life of service in hopes that there are lessons we can draw. 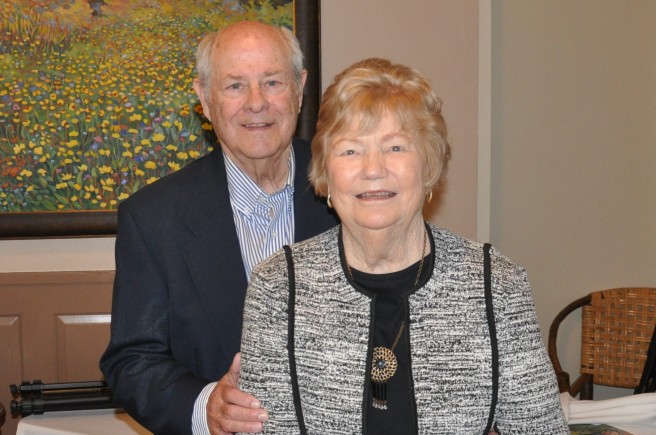 The 2018 Philanthropist of the Year is Lolly Ratajczak. With her husband Dave, Lolly found Door County in the 1960s and fell in love with its natural beauty. She assumed volunteer leadership positions with Birch Creek Music Performance Center, the YMCA, and the Door County String Academy. She gave of her time to countless other groups and was a founding member of the Women’s Fund of Door County.

In preparation for this year’s celebration, I found myself re-reading the works of Paul Loeb. In his famous book, Soul of a Citizen, and his subsequent anthology, The Impossible Will Take a Little While, Loeb reflects at length on the civil rights icon Rosa Parks.

Now I’m sure that most everyone knows the basics of the story of Rosa Parks. She was the 42-year-old African American woman who on Dec. 1, 1955, refused to obey an Alabama bus driver’s order that she give up her seat on the bus to a white passenger who had just gotten on the crowded vehicle.

Of course, for those of you who know Lolly, you know that her exceptional grace and modesty is making her cringe right now by my trying to compare her to Rosa Parks. I’m not going to embarrass Lolly by trying to equate her with Rosa Parks, but I’d ask for your indulgence because there is a parallel I’d like to explore.

The common portrayal of Mrs. Parks is as an uninvolved person, sitting on the sidelines of segregation, who simply got tired of giving in and impulsively decided that she would no longer subjugate herself to the racist and obscene Jim Crow laws.

What many of us have forgotten is that Mrs. Parks was not the first person arrested for refusing to give up her seat on the bus. In fact, before Mrs. Parks was arrested in 1955, Claudette Colvin, Susie McDonald, Mary Louise Smith and Aurelia Browder were also arrested, on the same bus system, in the same city, for the same crime.

Loeb reminds us that the leaders of the NAACP created a list of specific candidates with the inner strength, and personal stories, that the NAACP believed were well suited to undertaking this very specific act of resistance. Mrs. Parks was simply the next name up on the list.

Now this truth in no way diminishes the bravery, power and historical importance of Mrs. Parks’ refusal to give up her seat. But this tremendously consequential act, and the historic changes that would follow, did not begin with Mrs. Park on that fateful day on the bus. Rather, it began with all the humble, frequently invisible, and often frustrating work, that Mrs. Parks and countless others undertook in the years before that pivotal day in history.

Mrs. Parks had been an active member of the Civil Rights Movement for many years before then. She had been the secretary of the Montgomery Chapter of the NAACP. She had even recently attended a training program on the techniques of peaceful resistance.

The stories we are fed, be it in People Magazine or on video clips on Facebook, are of individual people who come out of nowhere to take sudden and dramatic stands against the world. That leads us to the false conclusion that change occurs instantly, when one brave individual decides to take a lonely and bold stand.

Loeb writes that the myth of Mrs. Parks as a lone activist reinforces a notion that anyone who takes a committed public stand, or at least an effective one, has to be a larger-than-life figure – someone with more time, energy, courage, vision or knowledge than any normal person could ever possess. When we enshrine our heroes on pedestals, it becomes hard for us mere mortals to measure up in our eyes. We find it hard to imagine that ordinary human beings, with ordinary flaws, can do extraordinary things when we come together in service of a common purpose.

The lesson of Rosa Parks is not of the singular hero standing alone against the world. Mrs. Parks’ journey informs us that progress is the result of people inspired by a shared vision coming together to take deliberate, incremental action. And sometimes those actions can change the world.

Therein is the parallel with our friend Lolly Ratajczak. Lolly was not the first person to serve as president of the Board of Directors of the Birch Creek Music Performance Center. Nor was she the last. Yet when her turn came, the organization took a single step in the right direction. Then she helped it take another step. And then another. Eventually, those steps took Birch Creek on a journey to a place almost unrecognizable from where it began.

And Lolly would be the first to tell you that she didn’t do it alone. But it was her determination to succeed combined with the dignity with which she carries herself, and the graciousness through which she treats others, that inspired people to join her on that journey. Time and again, this has been the pattern of Lolly’s life of service here in Door County.

This article was written by the President and CEO of the Door County Community Foundation, Bret Bicoy, and originally appeared in the Peninsula Pulse.